By Katarina Makkaiova15th August 2016 No Comments 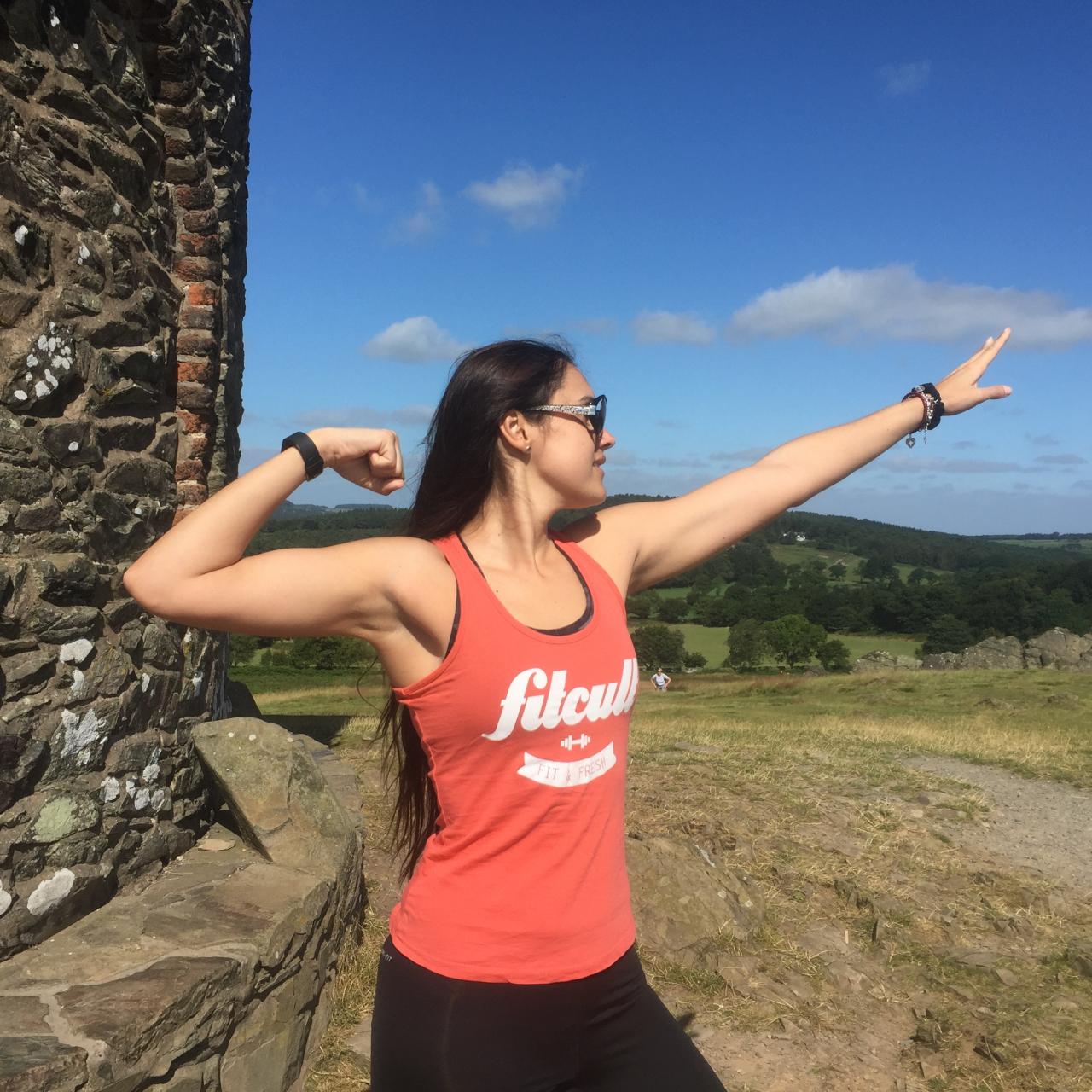 Its week 3 of my cut. Yayyy. It started off pretty well, but it seems like Mondays are a bit weird for me when it comes to dieting. The first part of the day went well, but later I started to compare myself to others. Yeah, I do that once in a while, so I had to give myself some slaps to get me back to reality. You know we all give ourselves questions like: “Why my glutes are not shredded like her?” “Why my belly is not more defined?” Pictures on social media are not always helpful, and once in a while I still get this down feeling.

After giving myself some virtual slaps and checking some old pics from my first shoot, I was back to my old self. Its me vs. me, and the only person I’m trying to be better than is old me. To top off this down feeling down, I had a small Double Decker bar, which I made fit into my macros. No cheats, no binge, I made it fit. And it was worth it. I was fully back to my old-self.

It should had been rest day, but decided to do some abs at home because I fancied it. You might think now that I’m not committed, or that I failed, but I don’t look at things like that. A chocolate bar, or something what wasn’t planned in your diet isn’t a failure. I might have done it wrong that I didn’t plan the chocolate into my diet for this week, but when craving comes, I will make it fit. No matter, even if dinner will be chicken and vegetables. It’s always worth it. Depriving yourself totally won’t help you to get where you want to be.

Next week my training days will change but more on that later. Let’s say I’m excited as I’m trying something relatively new for me.

I woke up on Tuesday feeling great. It must have been that it was my refeed day and I had 300g of carbs planned for the day. Gimme carbs, gimme food. First workout of the week is always the heavier one.

Still trying to find the perfect stance and bar position for my long body on squats but pleased, that I have managed to add another 5 kg since last week to them, and another 10 kg onto my hip thrusts.

The weight on other exercises went up too. I’m so happy about it and happy about my backside progress too. I was working my butt off for months to build a booty, and I’m very pleased that I can finally I see how far I came. Things like this count. I don’t want shredded abs, as they won’t last long, but that ass will, as taking dieting slow.

I got home pretty late so dinner was only a roll with ham and vegetables as I had an early start at work on Wednesday. I slept like a baby though! Must be the before-bed carbs and tiredness from my workout.

Wednesday went pretty smoothly, and it was non-training day so a lovely relax came in handy after the Tuesday’s workout. Thursday started of great, but got angry because of some bad news which I had on Wednesday.

My Level 3 PT course was moved to a different location and date, and it pissed me off. I was looking forward to it, and thought I will be qualified by October. Well sometimes things change, but not giving up. Unfortunately I’m one of those that when something goes wrong I turn to food and eat. Thursday wasn’t different.

It was my refeed day, but oooops I went over my carbs with 200 g. It happens, and I didn’t train, stayed in bed and didn’t even care about hitting my daily. I simply had a lazy day with carbs. Lol. Did I felt guilty? Nope, things like this happen as we are all humans.

It took me a while to learn this and to not feel guilty. Some people punish themselves with hours of cardio, or live on an apple for couple of days, but I just thought, “Friday is a new day”. And it was much better. I went for a lovely long walk, did my training, stuck to my macros. Yayyy, winning!

Saturday and Sunday went great, did my training on one day and went to Bradgate Park on the other day. My caloric deficit was on point even though Thursday wasn’t the best day, but I know what to do to fix it, so the end of the week was great. I just ate a bit less, that’s it, no starving, no endless hours of cardio.

The bloody scale didn’t move this week, so we will see what next week will bring before reducing numbers. I hate being hungry, and don’t want to lower numbers too much. I have lost some inches though this week and progressed on weights, so I will take this as progress. Of course most of inches lost were from chest; a classic, typical woman problem, and something has gone down from hips and waist too. I smashed deadlifts this week as well; I pulled 85kg for couple of sets, for 7 reps.

There are no progress pics, as I forgot to take some, but I’m mega happy that my small waist is back. This week I realised that I grew up fitness-wise. What do I mean? Well three years ago when I got the fitness bug, I badly wanted abs, not realising that they often not sustainable and not healthy, especially for women. My main goal with this mini cut is to feel good in my own skin, to get rid of some after-bulk fat, to be happy with myself and to look strong. Don’t forget having abs doesn’t mean that the person is healthy and know what they are talking about.

Next week is my birthday, so for one day I won’t be counting macros at all, but it doesn’t mean that I will eat whatever I want. I will just have a day off, but will still keep chasing steps and train hard.

Check out how one of my training sessions looks like.

Another week, and the scale has finally decided to move. My work trousers feel lose and fit much better so I take it as progress. First training day of the week and refeed as well. Went pretty smooth. Haven’t increased the weight on squats, but added reps and realised last week instead of 5 kg I have added 10. Silly me, but added weight on hip thrusts and other exercised.

Tuesday meant to be rest day, but there was something new I wanted to try, Brasilian jui jitsu. What a great class and experience, and will be back next week too. Wasn’t impressed with all the jumping and head rolling, hand walking etc, but hey ho, it was fun. You never know when will you need self defense.

Survived my first ever Brazilian jiu jitsu class ? Great fun and will be back next week. Let's say @dangerousmrd dragged me there kicking and screaming ?? If you're in Leicester, check in with @bermudacorrigan ??

Wednesday meant I had a day off tracking as it was my birthday. Another year younger. Ha ha I wish! I started the day with some protein pancakes with curd, peanut butter, Reeses and homemade plum, had a pizza pretzel and a 3 course meal which was delicious. I didn’t track anything. Why? Because it was my birthday and its only once a year. Does that mean I eat everything I saw? Nope, but enjoyed myself and had even a drink.

Happy Birthday to me ??You think people who love fitness doesn't have a drink on their birthday? Maybe some won't an I usually don't drink but today calls for a drink. #enjoyLife #makememories??#birthday #life #slovak #slovak #slovenka #iifym#flexibledieting

Surprisingly, my weight didn’t go up on Thursday. Winning! And it was my training day, which went great. Friday… nothing to report. Saturday I trained in the morning and made a lovely Nandos meal fit my macros.

Sunday meant rest day and because I haven’t felt my best, been just chilling and recharging for the following week, meal prepping and doing typical Sunday chores. It’s very important to take full rest days, when you don’t care about chasing steps or workout, and you just chill and recharge. Three weeks ’til holiday; it’s getting closer.